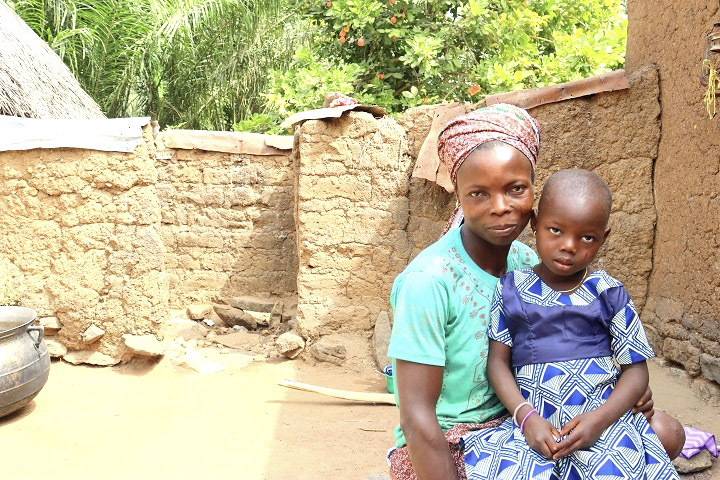 Back in July 2021, we announced the launch of the Integrated Primary Care Program in the Binah district. A total of 40 full-time Community Health Workers were recruited from their communities to deliver high-quality health services and contribute to fighting the causes of mortality among mothers and under-five children. Six months after launch, members of Integrate Health’s communications team, based in the city of Kara, traveled to the Péssaré community in the Binah district to hear from families impacted by the Integrated Primary Care Program.

Reaching the Péssaré area, Integrate Health communications team found Ariette Tchotilim, mother of four, whose daughter was recently treated by Yendoupabe Kampouribe, an Integrate Health-supported Community Health Worker. When she saw the team arriving, Ariette welcomed them with a large smile on her face and invited them to sit in her courtyard.

Earlier this month, Sylvie, Ariette’s three-year-old daughter, had a fever. Community Health Worker Yendoupabe, who was performing active case-finding visits in Ariette’s neighborhood, consulted Sylvie in her house. Ariette diagnosed Sylvie with malaria using a rapid test and provided treatment and prevention advice to the family. Yendoupabe went back to Ariette’s house every day for follow-up visits. She made sure that Sylvie’s health was improving and that Ariette was giving her daughter the treatment as she was instructed. Sylvie is now doing much better.

Before the Integrated Primary Care Program launched, the community in Péssaré used to rely on traditional healers providing herbal teas for treatment. Their closest health center is difficult to access, and the cost of transport and treatment used to be major obstacles to accessing healthcare. Without the Integrated Primary Care Program providing free care, mothers like Ariette could not afford care for their children:

“Money is tight, and it’s the biggest issue we face when one of our children is sick. But thanks to the medication the Community Health Worker gave us for free, my daughter was able to quickly recover. I’m grateful for Integrate Health and its support.”

In January, the rainy season often associated with peaks in malaria cases is long gone. However, malaria remains a significant threat for rural families even in the dry winter months. For example, with water sources drying up, mosquitoes lay their eggs wherever they find still water, which can be close to people’s houses. If showers do not have proper drainage, puddles can attract mosquitoes. Malaria threatens young kids all year round.

Against this reality, Community Health Workers play a critical role. Carrying out home visits in their neighborhoods, they have the capacity to detect, test, and treat malaria at an early stage. But their contribution does not stop there. Community Health Workers are also trained in malaria prevention. They educate parents on how to better protect their children against malaria.

For instance, Community Health Worker Yendoupabe explained to Arriete which health habits to adopt (such as using mosquito nets) and how to manage the upkeep of the courtyard to prevent puddles and mosquito nests from forming. Armed with treatment medication and prevention information, Community Health Workers are the first line of defense against preventable mortality and contribute to improving the quality of life in the communities they work with.

All Integrate Health-supported Community Health Workers are provided with Personal Protective Equipment and are required to wear it during their home visits, for their own safety and the safety of their patients.